For any large military base under the US military, the military police unit that maintains military discipline and manages the barracks is indispensable. The personnel of the US military police units deployed in Iraq, Afghanistan and other theaters, because they are in high-risk zones, are usually fully armed like infantry in conventional combat units, and can only be identified by the "MP" armband. The U.S. military bases located in the United States and NATO allies are far away from the war zone, so the military police officers on duty naturally no longer need to be fully armed as if they are facing an enemy. They usually wear normal uniforms/camouflage combat uniforms and matching military caps. OK. However, after the shooting at the Fort Hood base of the US military in Texas, the originally peaceful and peaceful US military base suddenly became dangerous. The U.S. military police on duty at the base must not only deal with the original daily tasks, but also be on guard and respond to possible gunmen at any time. After the Fort Hood shooting in 2009, the U.S. military tightened security measures for military bases nationwide and introduced a series of new regulations, including strengthening cooperation with local civilian police and adding content to military training courses about base attacks by insiders (Of course, these measures have not effectively prevented the occurrence of similar incidents). As one of the countermeasures, the US military police began to wear R20-D bulletproof vests produced by Point Blank when on duty. The body of the Point Blank R20-D bulletproof vest is made of black nylon (there is also a red Firearms Instructor version), which is fixed by Velcro ELCRO® buckles on both sides of the body. The structure is very simple. The role of Point Blank R20-D bulletproof vest mainly includes three aspects: one is to provide ballistic protection for the military police; the other is identification; and finally, there is a limited carrying capacity. There are a row of 4 fixed sub-bags under the front of the vest. Due to the limited capacity of the secondary bag, the US military police, in addition to wearing the Point Blank R20-D bulletproof vest, must also be paired with the Duty Belt when on duty. Because the U.S. military police need to carry many weapons and equipment when on duty, they are basically the same as the local civilian police: pistols, backup magazines, Taser stun guns, telescopic batons, gas sprayers, handcuffs, handcuff keys, radio stations, flashlights As well as the notepad, plus personal items such as key wallets, the 4 pockets on the R20-D bulletproof vest obviously cannot fit. What's more, weapons such as pistols, back-up magazines, Taser stun guns, telescopic batons, gas sprayers, handcuffs, and non-lethal police equipment are not simply "bring them with you". At a critical moment, the weapon must be placed on the waist and other places within easy reach and easy extraction. 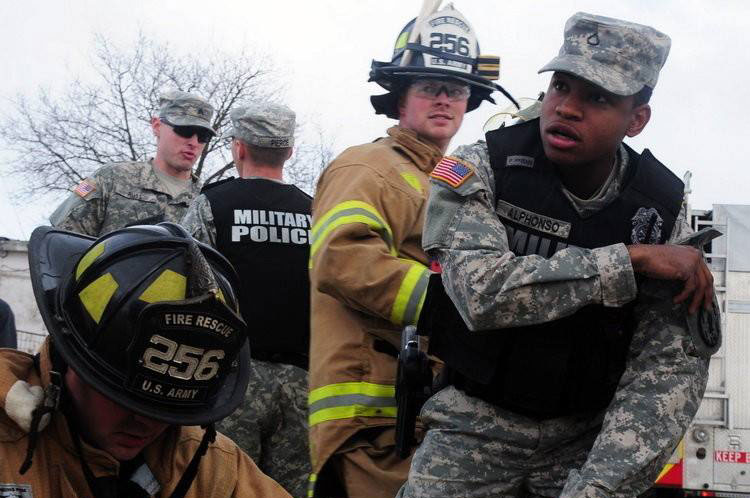 The Point Blank R20-D bulletproof vest purchased and equipped by the U.S. Army Gendarmerie has a large-size "MILITARY POLICE" reflective logo on the front and two small pieces of Velcro under the webbing on the left and right shoulders. The right side is used to paste the name strip with white characters on a black background, and the left side is used to paste the US Army Law Enforcement Shield Velcro seal. Readers who came up with this look should pay attention to this detail.